The villagers are troubled by the rising of a red moon, but later somehow rejoices because it is a sign of Crown Prince Jin Yeon's arrival, and, thus, good things shall happen. However, Yi Hwi is greatly distressed of the people of Deung Ha Bul Myung since their headquarters is set on fire.

In Bi Hwa Rim, the rebel army seek refuge from a nearby mountain but are thwarted by the Bi Yeong Pal Mu who orders them to surrender. An impatient Baek Ju plans to go to Yu Hyang Ru with Baek Ah to catch the rest of the rebel army, but Baek Yoo Shin interrupts her and explains that the rebel army are not ordinary people like thieves or robbers, for they are soldiers taught well by an ex-Imperial Guard. With the archers ready, Yoo Shin signals them to fire their flaming arrows onto the mountain.

Meanwhile in Yu Hyang Ru, the rest of the Bi Yeong Pal Mu led by Baek Ah surrounds the house. He orders the capture of everyone who escapes and allows the imperial army to kill anyone who resists. Wol Young Hwa is left in the house while everyone else are either captured or killed. Seol Hwa, who resists to be captured, is rescued by her mother and seemingly kills the guard. However, Seol Hwa is hit by an arrow and Baek Hwa calls for help. She is then stabbed by a sword of the imperial guard whom she attacked earlier. Stating his last words, the guard is eventually killed by Yi Hwi. As they go out of the place, Young Hwa lets Yi Hwi and an unconscious Seol Hwa to go because of her deep wound. She then entrusts Yi Hwi to Seol Hwa and reminisces her last memories of adopting Yi Hwi and Yi Jeok. She then officially closes Yu Hyang Ru while the Bi Yeong Pal Mu's archers fire on her. After a few more memories thinking of Seon Woo Seo In, she finally dies.

Jang Rok Ha and Meng Gyeom watch from a distance, and Rok Ha announces that the deal is over as of that day.

Baek Ho meets Yi Hwi on the mountains but Yi Hwi returns to Yu Hyang Ru as he promised to Baek Hwa. Seeing his dead "mother", Yi Hwi lets out screams of remorse. It is stated that it the rebel army's complete defeat three days prior to the revolution. 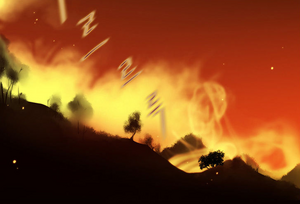 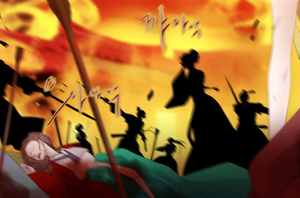 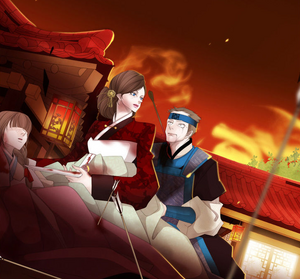 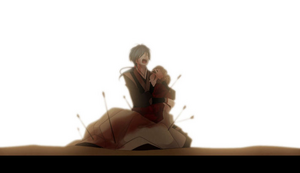 Retrieved from "https://twelve-nights.fandom.com/wiki/Chapter_44?oldid=6451"
Community content is available under CC-BY-SA unless otherwise noted.